What makes you cry out? 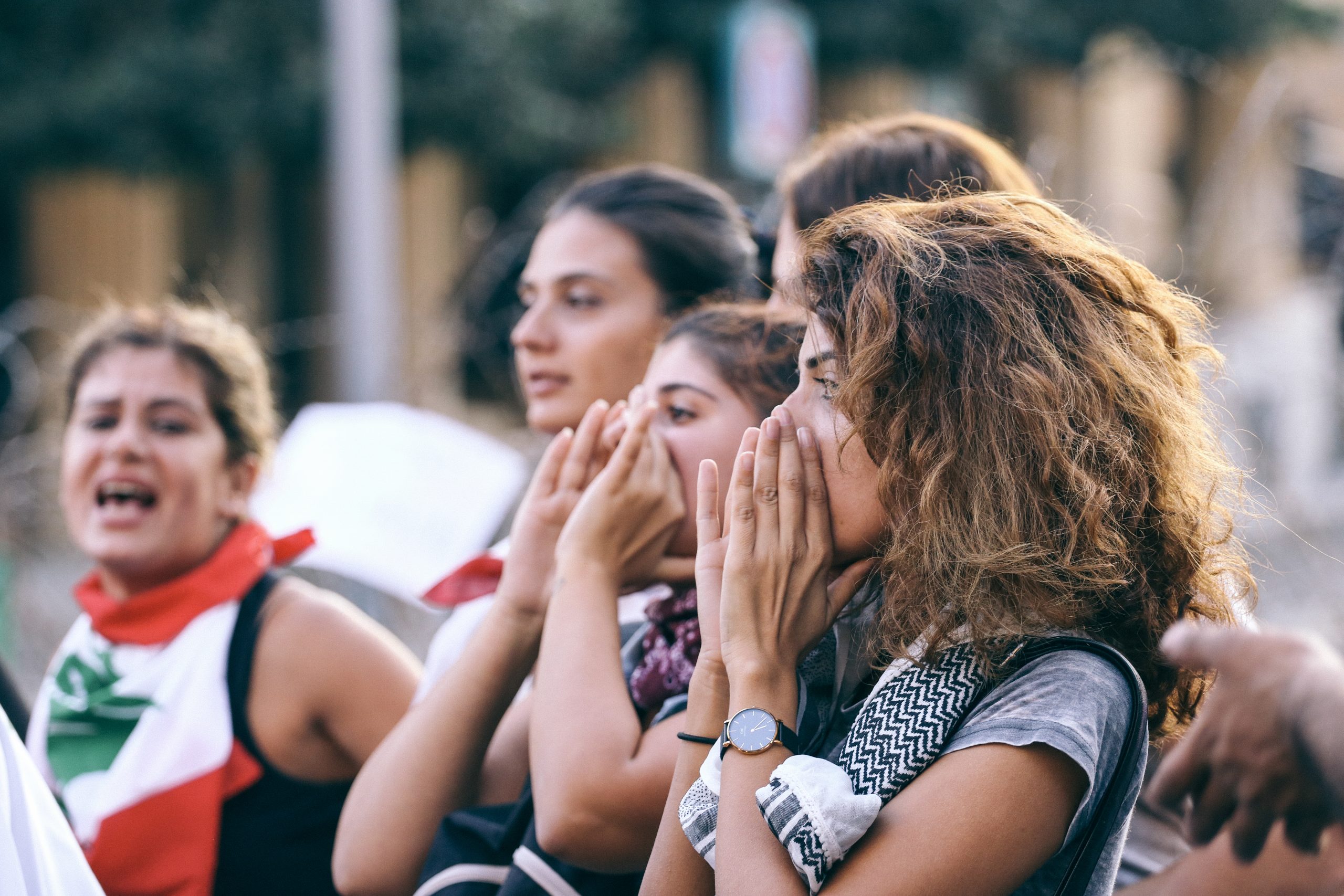 A group of young women*, their hands forming the resonance chambers of the slogans. They are intensifying the shouts and underlining the vehemence of their demands. In the blurred background, another woman can be seen, a Lebanese flag wrapped around her neck and upper body. The national flag seems to signal social affiliation and their claim to representation. The gaze is directed indefinitely into the camera, the face is captured in the moment of screaming.

In this atmospheric shot, Lilian Mauthofer documents the essence of the protests in an almost metaphorical way. The shouting of the group of people is the break with an imposed silence – the screaming the opposite of the mute endurance. The spontaneous-looking photograph shows the young women* during the street protest. They draw their strength from the collective action and last but not least, from the common shouting of unifying slogans. The synchronous shouting.

In art history, we speak of iconography when we observe the history of certain motifs and their changes over time. and we question the reasons for these processes. The scream or cry has a diverse iconography. This explains, to some extent, why the photograph under consideration captures the situation of the protesters so effectively.

In his doctoral thesis on the phenomenon of screaming in 20th century art, the art historian Andreas Beitin describes it as „an evident expression of an extreme psychological condition, which, as the most intensive form of human communication, radically changes the visual field, while at the same time, it represents a vision of the soul“.¹ According to the author, there are different levels of representation of the motif; often it is about an interplay of power and thus about oppression and liberation. The complexity of themes of sexuality and violence plays an important role in the iconography of the scream in the 20th century. Thus, the oppression of women and the fight against it became an increasingly prominent motif.² This is closely related to the photographs shown in this exhibition, which take a concentrated look at the feminist aspects of the Thawra.

According to Beitin, the scream goes through various changes of meaning in its forms of representation: At the beginning of the 20th century, it showed above all need and existential fears, and increasingly changed in the direction of a symbolic and experimental motif. In the context of political upheavals or armed conflicts, the cry is used as an „accusation of social grievances and general human misery“³ to arouse sympathy and empathy for the suffering of others.

The short and undoubtedly incomplete theoretical digression offers a reading of photography. In his work, however, Andreas Beitin describes the cry in the context of painting. The works he discusses are staged artistic expressions of a specific time and should be understood as political and social reactions. The photography of Lilian Mauthofer, on the other hand, is spontaneous and shows a real section of life. Even though the choice of motif, the blurring and the cropping of the image are also forms of staging, they function more directly and intuitively than in painting. The aspect of intuition seems to be decisive in connection with the interpretation of the picture. The removal of the group of people from the context of the demonstration and the isolated depiction of their cries of protest testifies to the levels of action inscribed in the motif of the scream. As viewers and Lilian Mauthofer as an artist, we are aware of the social significance of the scream, we read it as empowerment, as a lament, as an expression of protest and community. This is one of the reasons why this photograph is so powerful – it activates an iconographic knowledge of the motif of the scream inscribed in our heads.